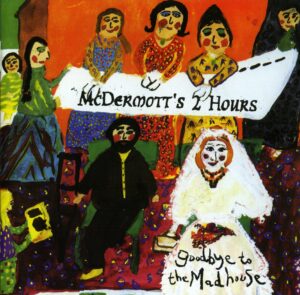 Goodbye to the Madhouse

A new McDermott's album is a rare thing, one that matches their first album, The Enemy Within, is something to be savoured. Goodbye To The Madhouse features the inspired songwriting of the acerbically witty Nick Burbridge reunited with the original members of the group. The album also involves several Levellers, and marks the first non-Levellers release on their On The Fiddle Recordings label. The Importance of McDermott's in the late eighties folk-punk and edgier folk-rock explosion cannot be over emphasised, they had a seismic effect on the whole scene. The Levellers cite them as a major influence to this day, their cover of Dirty Davy being one of their most popular live tracks.http://www.spiralearth.co.uk/reviews/madhouse.asp